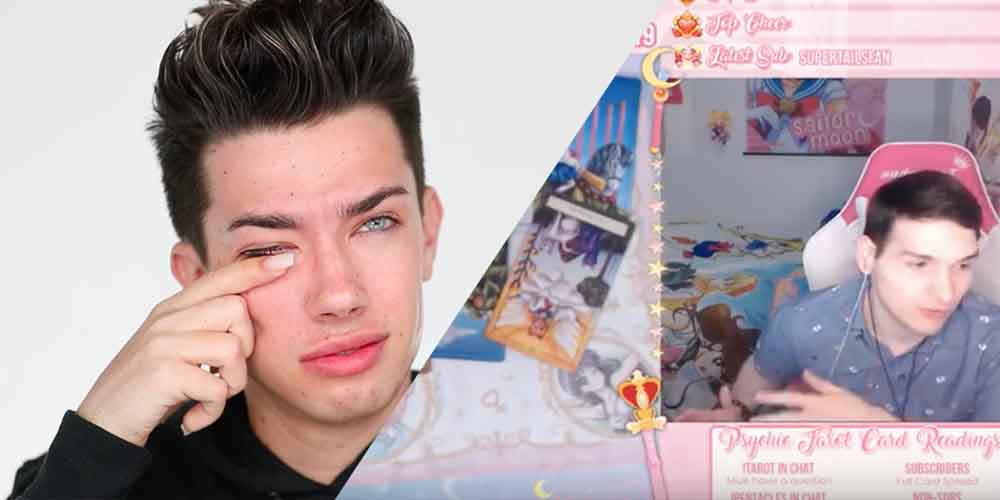 By now you’ll all be pretty up to date with the whole James Charles V Tati Westbrook situation, but if you’re not then you can just keep scrolling further down and I’ll add a recap for you.

While everything seems to has calmed down as far as tea-spilling goes, it seems that something else has ‘shook’ the YouTube community – and that’s the fact that a YouTuber with a relatively small following actually PREDICTED everything that was about to happen to James WEEKS before it did. Spooky.

YouTuber Antphrodite, whose real name is Anthony, posted a video to his YouTube account of a live tarot reading on Twitch that he held for James Charles, where he creepily managed to see the whole Tati’pocolypse happening before we all did.

Because his reading is SO in-depth and worth watching, I’m going to show you what he managed to predict through the eyes of some people who commented on his video.

One user wrote: “Holyyyyyy CRAP. What a SPOT ON prediction. Financial disaster, expose by an older woman in the same industry, him being overly ambitious, manipulation: who could he possibly be ignoring?! He ignored Ryland and Shane when they tried to offer advice! He DID give money over the Internet to those boys, buying them plane tickets and Coachella tickets. James was definitely emotionally manipulated by those kids, and he can’t get rid of them because EVERYONE on the internet sympathizes and automatically believes them. “

Another commented: “Some people saying that he could’ve guess it. Not really, if you follow Tati (I do and did before all of that) you would know that she doesn’t like scandals. You would know that she takes JC as family and that they would probably talk to each other and fix all that. The first guess would never be a freaking expose with world war range. This dude is really impressive.”

If you didn’t understand any of that, he basically claimed that James was about to be betrayed by someone he trusted, and that it would come as a complete shock to him. Anthony also said that James’ tour would probably be cancelled, or that his team would need to step in and have to quickly rectify things, and that a legal battle and his career would be able to take a HUGE dip. There’s a LOT more he goes in-depth with, but it is scarily accurate.

Since making the shocking predictions, Antphrodite’s channel has gone from 2K followers to 27K at the time of writing, and people are flocking to his comment section because they can’t believe how accurate his tarot reading was.

He does go on to say at the end of the reading that he believes that James WILL be vindicated at the end, and gives a stark warning to anyone that could be on the receiving end of James’ wrath, because the cards say that whatever battle he takes he will likely win.

Interesting – who needs gossip channels when you can just watch this psychic genius?!

For those not up to date with all the Tati and James drama, take a look at these two articles – they’ll clear everything up for you.

Katey is the Trending News Editor for Social Chain Media. She graduated from Manchester Metropolitan University in 2017 with a BA of Film And Media Studies. Former Social Editor of PRETTY52. Tweet her @kateydoll, or email her at katey.roberts@socialchain.com